From 4-H To Warbird Restoration

Did you know there is a company in the northwoods of Bemidji, Minnesota restoring WWII airplanes? Not many people would think a company like that even exists--but it's real and it's amazing. AirCorps Aviation is this fascinating place in the land of Paul Bunyan, and specializes in the restoration, maintenance and rebuilding of WWII vintage aircraft.

Step inside the door and you'll instantly feel like you're a witness to an unknown craft. The sounds of riveting, the sight of green paint drying, old yellowed tags attached to airplane parts from the 1940s, and photos of pilots standing next to their prized possession. Not to mention that big shiny fuselage sitting in the middle of the room, exposing the thousands of wires and components that will make this beautiful airplane fly once again. Yes we are still in Bemidji, and not even at the airport. Just a building from the outside, that once held beer, now is the home to one of the most unique and interesting businesses I've ever seen.

AirCorps Aviation was started by Erik Hokuf, a true entrepreneur in every sense of the word. Originally from Bemidji, Erik left for 14 years to live in Minneapolis and Granite Falls, then moved back with his new family to expand his business with three other partners. The company has grown to over 25 people, won many awards, and continues to innovate the industry with new products and processes.

So who am I and what do I want to tell you? I'm Erik's wife, Sarah. I could go on and on about the magical things happening at AirCorps and the awesome airplanes they get to work on like a P-51 Mustang or a Stearman flown by Pres. George H.W. Bush during training at a Naval Air Station in Minneapolis, but that's not the story I'm going to talk about. I want to give some insight on how your childhood hobbies can turn into a lifelong passion and a career. "This isn't work, it's my life..."

Growing up on a farm in the small town of Pinewood, just north of Bemidji, Erik and his three brothers learned how to build things at a very young age. Build what? Anything you can think of. That's the beauty of having an imagination, parents who weren't too overprotective, and acres of tools, equipment and exploration. Learning these common sense and do-it-yourself skills can give one a great advantage in life to not rely on others for everything. Hmm, I think I'm starting to see a formula now. 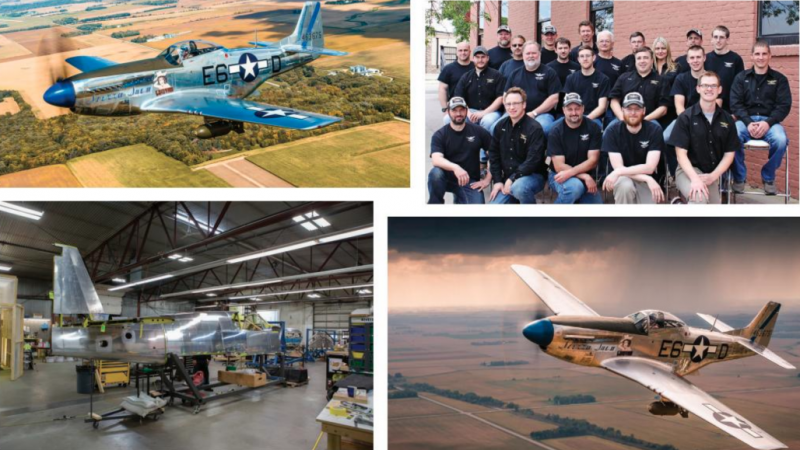 So what fueled Erik's love of airplanes? Could be a few things, but one noticeable milestone was a 4-H project involving aerospace. You could build model rockets, plastic models, and radio-controlled airplanes. Now he was really interested in aviation. His oldest brother, Shawn, went to the United States Air Force Academy. He's now an international airline pilot for Delta. The next brother, Stefan, now works for AirCorps Aviation running the Reverse Engineering division out of Minneapolis, and has his own passion of restoring Hot Rods. And finally, his younger brother, Chad, is a part-time airplane mechanic at AirCorps and full-time Bemidji firefighter. Wow. Four talented brothers that now all have a connection to aviation.

Erik now knew that airplanes would be his focus and was driven from a young age. He figured out how to get a job at the airport as a mechanic the summer before his senior year of high school. Then he worked an on-the-job training program, so the second half of the school day he spent out at the airport getting high school credit and working toward his airframe & powerplant license. Very few people go that route today because it takes 30 months of on-the-job experience before you qualify. Then you take the same FAA test that technical school students do. He got his A&P license when he was 20, and at that time already had three years of experience.

So when did the opportunity to work on the Warbirds begin...

After working for Bemidji Aviation, Erik was employed at a charter company in Minneapolis for about four years. Through connections, he was contacted by Ron Fagen, a Warbird enthusiast with a love for P-40's. In 2004 he moved to Granite Falls and started Warhawks Inc. During his time there he restored and worked on a couple P-40's, P-51, and P-38. The P-40 Aleutian Tiger won Grand Champion at Oshkosh!

Erik had so many goals and dreams that the next step was to leave and start his own company. I had my own freelance design business for four years at that time so this wasn't new or scary to me. In 2008 we moved back to Minneapolis to start AirCorps Aviation. We had our first child during all this change and then moved the company to Erik's hometown of Bemidji with three other partners, Mark Tisler, Dan Matejcek and Eric Trueblood, who he knew would help in the success of the company. We've been here now for five years, have two kids, two businesses, many more dreams, and are part of a great community of hard-working entrepreneurs.

I want to encourage others that grew up similar to Erik--on a farm, small town, working with your hands, building, crafting--that you have the skills to do great things. 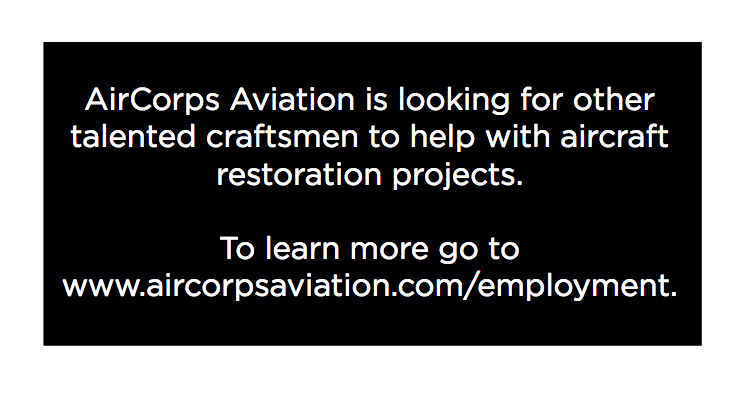