An interview with Sam Miltich, by Marah Evans

DEVOTED HUSBAND, FATHER OF TWO, ACCOMPLISHED JAZZ MUSICIAN, MEDITATOR, MENTAL HEALTH EDUCATOR, ADVOCATE, PROGRESSIVE LIBERAL, GARDENER, JOKE TELLER, SCHIZOPHRENIC, GRAND RAPIDS NATIVE. SAM MILTICH AND I SAT DOWN TO CHAT ABOUT HIS EXPERIENCE WITH SCHIZOPHRENIA, TREATMENT, HURDLES HE FACES (AND HAS FACED), COPING SKILLS, AND HOW HE APPROACHES THE TOPIC WHEN IT IS NEW TO PEOPLE. WE MET AT ONE OF SAM'S FREQUENT STOPS, BREWED AWAKENINGS, IN DOWNTOWN GRAND RAPIDS. 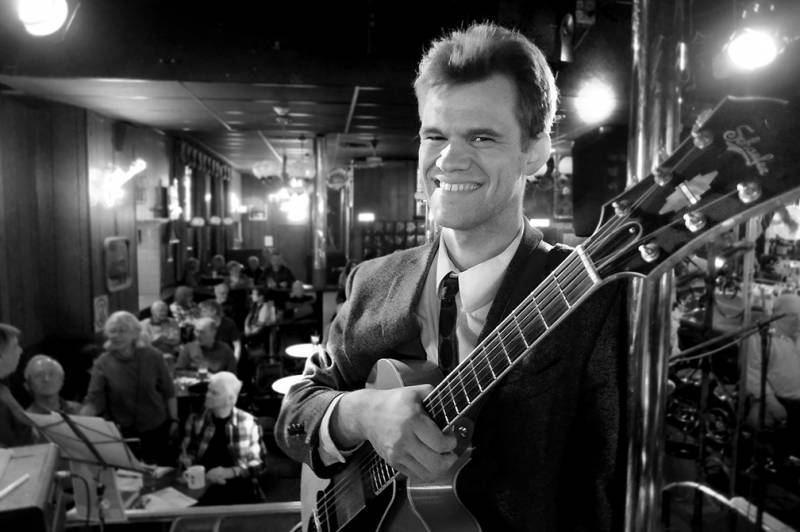 Marah: How did/does your illness manifest itself?

Sam: I was 22 years old when my mental illness first manifested itself in full blown psychosis. When first I say to people that I have schizophrenia, many times I am asked, "So what does that mean? What happened to you when you experienced psychosis?"

It began by intense crying for hours sometimes. As things progressed in the psychosis I began feeling paranoid. Things, people, places I trusted in the past, I felt I could no longer trust. Thoughts followed the feelings. I came to the conclusion that I was the antichrist and that there was a web of connection, that all the world's horrific experiences connected back to me somehow. One example is: I was psychotic when the 35W bridge collapsed. I had just moved to the Twin Cities that year and I was convinced I was responsible for the bridge collapse. I began to feel as though people could look into my eyes and hear my thoughts. My thoughts were so disturbing to me that I felt if an outsider could read my thoughts, surely they would alert law enforcement. I felt as though the CIA was coming to arrest me. I would lock myself in a closet for hours on end, with all the lights turned out, to practice what it would be like in solitary confinement. Surely I would be arrested if I was the antichrist. I eventually came to the conclusion that I would have to end my own life, not because I wanted to die or to harm those that I loved, but because I was doing so for the salvation of humanity.

Eventually, I was brought back home to Itasca County. I have mixed memories of that time. I remember being at a family cabin and hearing four wheelers going by on the road, convinced that this time the CIA had come and I would be taken away from those I loved.

I slept as much as I could to escape my waking hours because now it had flipped, the nightmares were during my waking hours, instead of in my sleep. Sleep became my only refuge from the intense fear, confusion, and paranoia I experienced. Throughout this time period, I began to hear voices. I experienced very intense auditory hallucinations. The best way I can describe it was that there was an internal monologue in my mind, relaying terrible messages. That I was evil, that I was harming my family, and other things I will simply keep to myself. That monologue became so loud and distorted that it seemed as though I was hearing a voice outside of my head. I began to see things in my bedroom at night. I once saw two men standing over me with a knife. I would see cats running around and shadowy figures standing in corners of my room, watching me as I lay in bed. I struggled deeply with religious delusions for years. I felt as though I was either a shamanic messiah or some incarnation of an evil force. I would vacillate back and forth wildly throughout a day. There were times when I couldn't even walk past a church without feeling a fire burning deeply somewhere inside my brain. Even the routes I would walk through Grand Rapids had to change so I could avoid that experience. For years I was unable to go to the Twin Cities, because the memories of my psychosis were so traumatic that encountering familiar places from that time would bring on such strong symptoms, that I would be pushed back into psychosis.

Fortunately the antipsychotics do help, so I don't hear voices as intensely or as much, but I still do some. Like I'm not right now but I was at like 1 o'clock last night.

Marah: Is it still very negative?

Sam: You know it's not as negative as it was. It's like a combination of it sounding like numerous people talking at once and music playing, so it's distracting. It prevents me from falling asleep.

Now, I still have some ongoing symptoms, but nothing close to what I experienced while in psychosis. My primary struggles with ongoing symptoms are cognitive struggles, which include racing thoughts, rumination, and confusion. This makes it challenging to work consistently. I struggle with what I would call glimmers of paranoia. Every now and then I seem to be thrust into a bizarre world, where everything seems cruelly ironic, and all events seem to have a negative double meaning. However, that is not a frequent occurrence. I struggle with some paranoia, which manifests itself in being overly concerned with what people think of me, or misinterpreting social signs, and feeling as though people's intent is emotionally harmful towards me, when in fact, it may be the opposite.

I am able to recognize a hallucination when it's happening and know that it's not real. But I mean it's been ten years of working on this stuff.

Marah: What hurdles have you faced in dealing with your mental illness?

Sam: I've had doctors dismiss my medical concerns, stating that my concerns were simply delusions and I wasn't to be taken seriously. I was unable to get care because my mental health issues would not be covered by insurance. I've been chastised in the back of a squad car as I was being taken to the ER for psychosis. And ultimately when I went to the hospital for a mental health concern, in the words of Elyn R. Saks (legal scholar, mental health policy advocate, and schizophrenic), "No one ever brought me flowers."

Simply, my mental health concerns have rarely been treated on par with how people with a physical illness are treated. My experience has been that many people simply feared me when I was ill.

To continue reading more about Sam Miltich and more great content in Lake Time Magazine, you can find it online HERE or consider supporting this independent publication by becoming a member and receive the latest issues PLUS great Lake + Co. Shop perks! https://www.thelakeandcoshop.com/collections/lake-time-magazine