As the snow flies in northern Minnesota, an idyllic refuge embraces sipping cocoa by the fireplace and submerging oneself in a good book. Today's busy world often lends to replacing the book with a smart phone or tablet or other electronic device, but remember the feeling of paper on your fingers and turning pages as you fall further into the story? This winter, reclaim that feeling and a bit of nostalgia by visiting your local library. 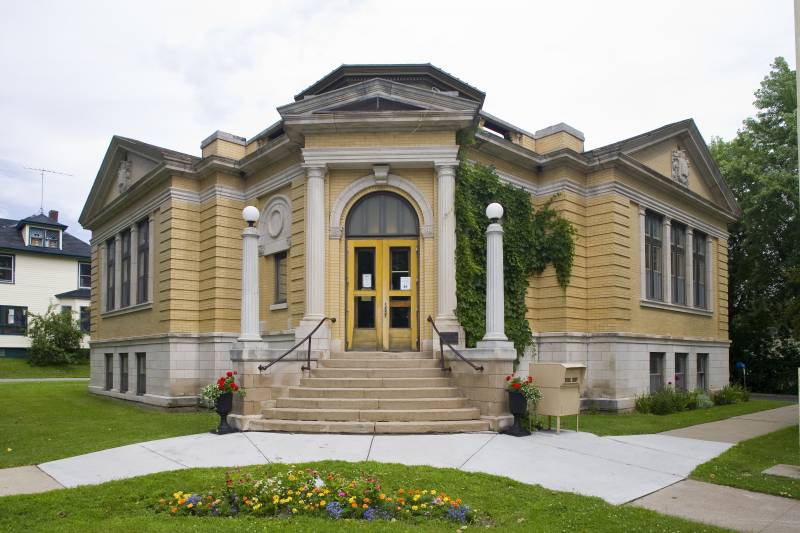 It was not until the early 20th century that public libraries became a conventional public good in the United States. In fact, an 1898 U.S. Board of Education survey identified only 637 public libraries in the entire country and a combined 3,000 books. At the time, most communities did not have a library funded with tax dollars because city taxes primary provided for police and fire departments, water services, and other necessities for a turn-of-the-century town. Libraries, if the community did have one, were often located in churches, saloons, colleges or universities, or private homes. Most of these were not open to the everyman, but rather required membership or subscription, or the right social status in the community.

Over the course of the next twenty years, the United States gained nearly 3,000 public libraries, with more than half of them financed by a man named Andrew Carnegie. During the span of his unofficial "library program," the American businessman spent over $41 million of his own wealth on the philanthropic endeavor. He funded 1,689 libraries in the United States, including a few private libraries (on college campuses for instance), and an additional 830 around the world. His giving was not limited to libraries; he also funded initiatives including museums, concert halls, institutions for education and science, trusts dedicated for enrichment and public goods in his hometown in Scotland, and endowments for teaching and international peace, to name a few.

Andrew Carnegie emigrated from Scotland to America with his family in 1848, settling in the Pittsburgh suburb of Alleghany, Pennsylvania. He was thirteen and found work to support his family as a bobbin boy running bobbins to the looms at a cotton mill. He then moved to a messenger at a telegraph company and taught himself to use the telegraph and gained a position as a telegraph operator. On Saturday afternoons, Colonel James Anderson of Alleghany invited Carnegie and other local working boys to his 400-volume home library, where they could borrow one book a week. Aside from primary school in Scotland, Carnegie relied on a self-taught education and a few night courses. He became a telegraph operator at the Pennsylvania Railroad. This opened the door to Carnegie's success and he flourished as a businessman in the Gilded Age following the American Civil War. He amassed a fortune by investing in railroads, steel, oil, and steamships on the Great Lakes. Known as a "captain of industry" by some, a "tycoon" or "robber baron" by others, Carnegie joined the ranks of Andrew W. Mellon, J.P. Morgan, John D. Rockefeller, and Cornelius Vanderbilt as leading millionaire industrialists. Carnegie retired from business in 1901 when he sold his steel company to J.P. Morgan who merged it with others to create United States Steel Corporation--the same company currently doing business on Minnesota's Iron Range. The transaction, a $480 million sale, slotted Carnegie as one of the richest men in America. In fact, scholars have calculated--with inflation--a net worth of $309 billion. This is more than twice the worth of Bill Gates and approximately five times that of Sam Walton or Warren Buffet. 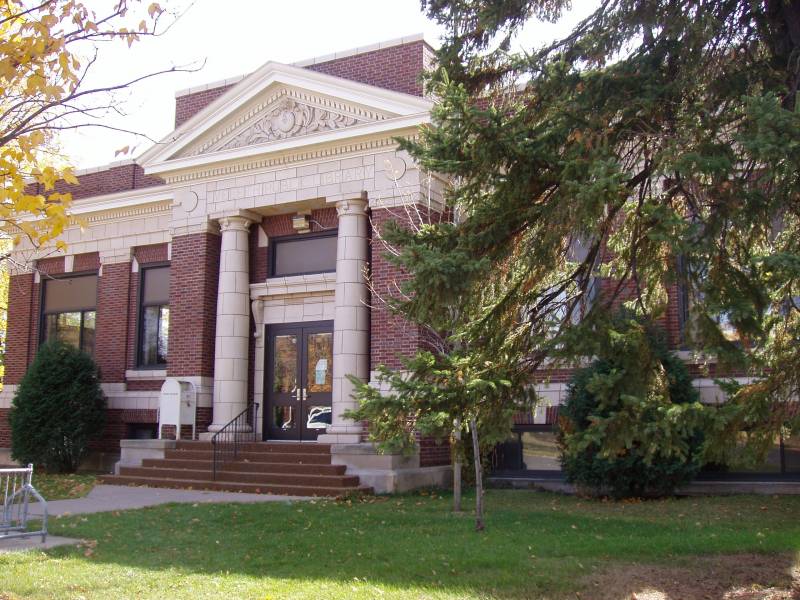 He described this philosophy in The Gospel of Wealth, an article he penned in 1889. After funding the first few libraries in the late 19th century, Carnegie gained notoriety and many requests based on word of mouth, newspapers, and magazines spreading the news of his grants.

The grants generally ranged between 10,000 and 20,000 dollars and approximately 70% of the grants were awarded to towns under 10,000 residents. Communities requesting funds received documents from Carnegie's private secretary and administrator of the library program, James Bertram. In order to qualify for the library grant, communities needed to demonstrate their need for the library and provide a site for the building. They also needed to commit to supporting library services and maintenance with tax funds equal to 10% of the grant amount, on an annual basis. Beyond these requirements, communities determined the architectural style and administered the construction at a local level, although by 1904 Bertram provided a pamphlet called, "Notes on the Erection of Library Buildings" which suggested six floor plans. This was primarily to subside extravagant architecture deemed frivolous for libraries. A variety of Carnegie library architectural styles splattered small towns and large cities; styles including Beaux-Arts, Carnegie Classical, Italian Renaissance Revival, and Prairie School, to name a few. Many Carnegie Libraries are on the National Registry of Historic Places, which the U.S. Department of the Interior deems as sites worth saving. They became the architectural landmarks of the community, including those still standing today.

Of the numerous Carnegie libraries scattered around the United States, 66 were built in Minnesota. Two dozen Carnegie libraries peppered the northern Minnesota landscape, of which five are still active libraries: Coleraine, Detroit Lakes, Eveleth, Mt. Iron, and Two Harbors. Others are now art galleries or offices, and only a few have been razed for various reasons. The Hibbing Public Library was erected in 1908 but the growing population required an expansion only eight years later; further discovery of an ore deposit right under the town resulted in a two-mile move. A new library was built and the Carnegie library was sold to the Oliver Mining Company and was later demolished in the 1950s.

Many of the Carnegie libraries in northern Minnesota feature Classical Revival-style architecture, which is a less-extravagant version of Classical-style architecture (think ancient Greece). The Classical Revival style was popular because of its beauty and seemed to suit a library, featuring grand stairs and beautiful columns. The regal feeling of these libraries escorts you through time, with the interior and exterior architecture. Many hardwood floors, crown molding, original bookshelves, and photos of the library's early days make these libraries true jewels of the town. Next time you're in one of these communities, stop by a Carnegie library, take in the history, and think about the philanthropy of Andrew Carnegie. 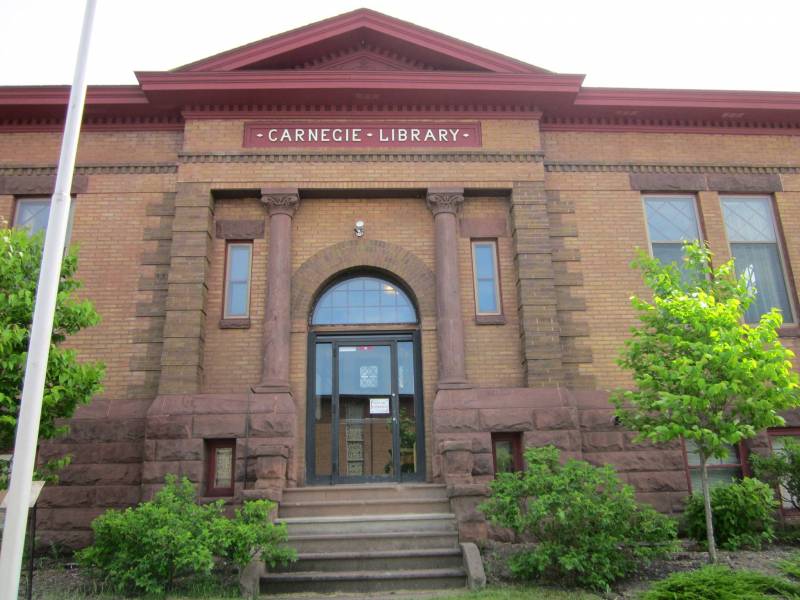 Northern Minnesota native, Angela Tanner has a reputation for bringing smiles and ease to all those who cross her path... and she's everywhere! Gustavus Adolphus alum, this Poli Sci bibliophile can be found researching MN history and Iron Range economics and business, national politics, or global socioeconomics and justice as she sips coffee on the shores of Trout Lake. 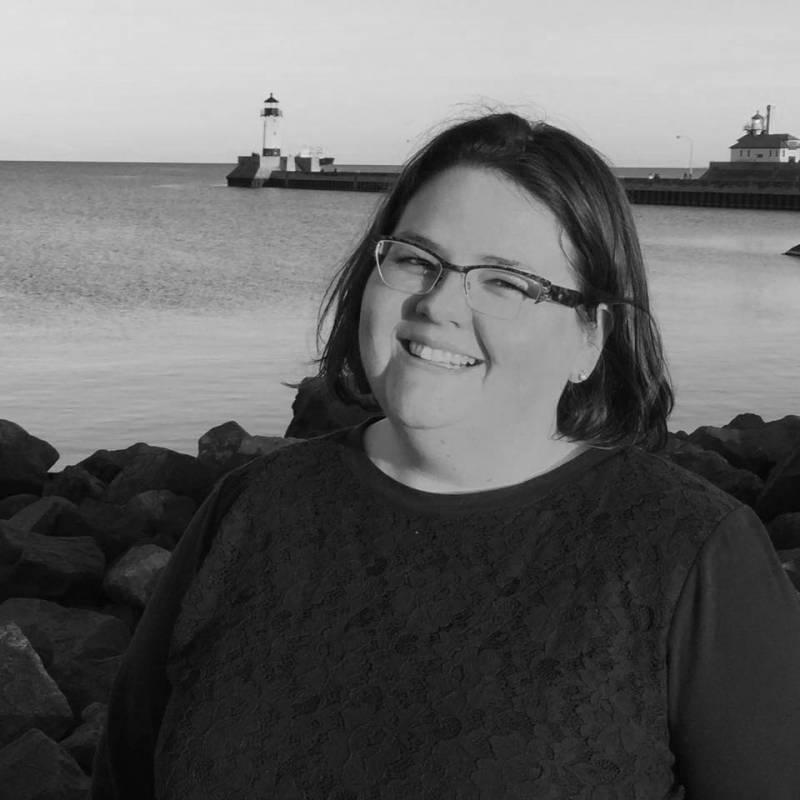 PrevLetter From The Editor
NextBaby It's Cold Outside!