For the Lore of Boathouses

by Karen Melvin and Melinda Nelson

"THERE'S A MOVEMENT TO GOING BACK TO THE FEELING OF QUIET, SIMPLER LIVING, AND THE NEED TO GET AWAY FROM HARRIED LIFE. THAT'S THE CORE OF THESE BOATHOUSES." 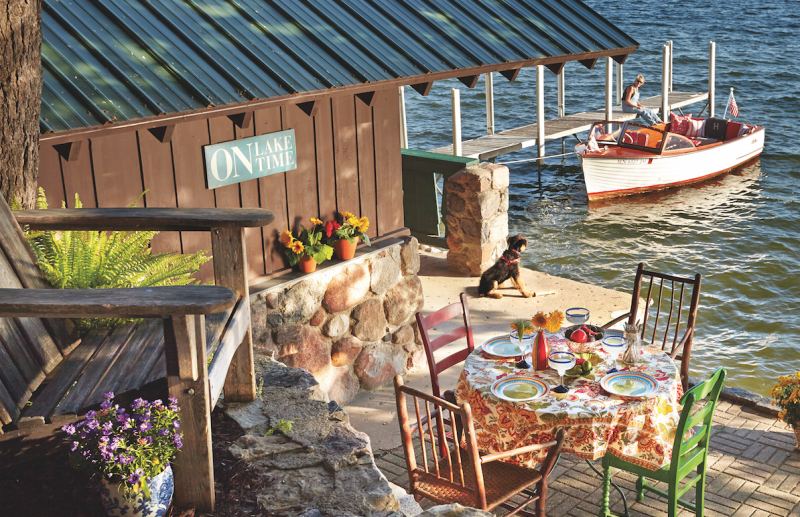 Boathouse by broad definition includes everything from screen houses to sleeping porches. It's really a place of respite next to the water. Utilitarian in concept -- a  structure  close to the shoreline used to house a boat -- these boathouses have morphed into much more. For the families that own them, they embody life on the lake.

Yes, the boathouse is for stashing the boat  and the rest of the necessary gear: kayaks,  canoes, paddles, paddleboards, water  skis,  fishing ackle, and life jackets. But it also holds the sweet memories of summer days spent on the water, golden sunsets embracing the horizon, and gatherings of friends and family.

For anyone who's ever sailed, boated, or paddled past a vintage boathouse on Lake Minnetonka and wished its rustic wooden walls could talk, here's your glimpse inside a few of these charming structures.

Photographer Karen Melvin and writer Melinda Nelson are the true experts when it comes to boathouses along our Minnesota lake shores. It's a true sensory experience of old and new, all at the heart of history, legacy, and, to put it simply, for the love of lake life and Minnesota's outdoor traditions. 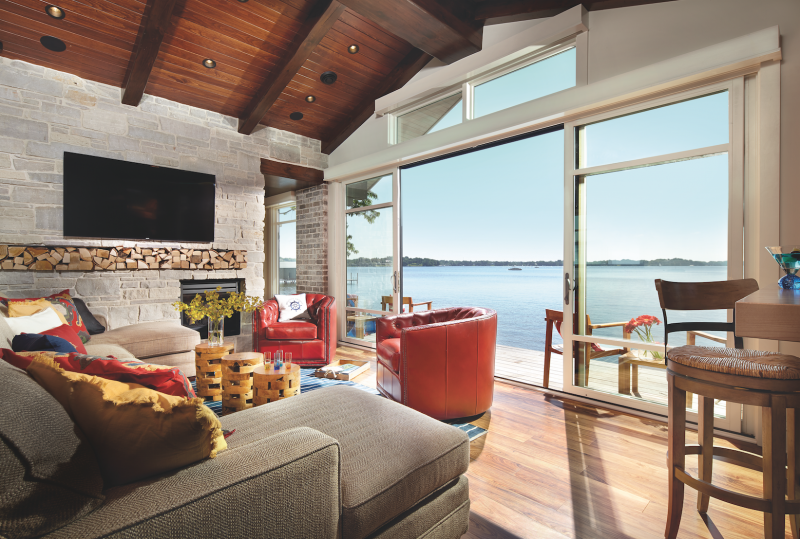 Of all the boathouses on Lake Minnetonka, there are only a few that still belong to the original families. Among them is the Swiss chalet-style cottage and boathouse on Big Island, Fruen family heirlooms for more than 70 years. The boathouse and chalet, with their colorful red and green painted trim, were built in the 1940s by A.B. "Arthur" Fruen, president of the Fruen Milling Company.

Inspired by a trip to Switzerland, Arthur built the chalet-style cottage on the water in 1940, followed by the boathouse several years later. To make it easier to walk from the main house to the lake below, Arthur designed 99 steps flanked by a fieldstone wall that zigzags across the steep slope. He arranged for the materials and equipment to be delivered during the winter when the lake was frozen so the trucks could cross the ice with their load.  For four years, Arthur and his sons worked side-by-side with Charlie Carlson, a stonemason, to cut and place each stone by hand.

Today, the property on Big Island continues to be a touchstone for the family. Now owned and cared for by Elizabeth Fruen O'Connor's six children. The main house, chalet, and boathouse are filled with photos, vintage canisters of Fruen cereals, and other mementos. With no roads and no cars, being on Big Island epitomizes the solitude of the lake and the comfort of the rustic and idyllic setting of the north.

Never underestimate the enduring power of sisterhood. In 1873, a trio of young women at the Lewis School for Girls in Oxford, Mississippi created "a club of mutual helpfulness." Guided by a desire to "Do Good" and support friendships among women, the students named the club Delta Gamma. Several years later they chose an anchor as a symbol of DGs, as the sorority sisters are still known.

In 1938, a pair of sisters named Katherine Welles Dain and Frances Dain built a summer house on a small peninsula just west of Wayzata. The Dain sisters kept the screenhouse but replaced the farmhouse with a white, Colonial-style home they named Mona Bina, a Chippewa word meaning "home for all." Designed as a summer house for the two sisters, Mona Bina had two sleeping porches, two bathrooms, and a small white cottage for their chauffeur. The Dain property was eventually handed down to Welles Eastman, a nephew of Katherine and Frances. The property continued to be passed down in the family through the years until it was put on the market in 2008. Lo and behold a sorority sister would become the chatelaine of the home. One day, Katie Bassett, a DG from the University of Minnesota, and her husband, Marty, a fellow Gopher, drove out to Wayzata. As they drove down Shady Lane and saw the Eastman's house, the screenhouse, and the views of Wayzata Bay, they were charmed.

They bought the house and made several repairs and enhancements over the years. After living in their home for seven years, the Bassetts decided to build a new house on the original footprint. Katie, an interior designer and owner of Katie Bassett Interiors, worked with Lars Peterssen and Ryan Fish of Peterssen/Keller Architecture in Minneapolis to design a spacious family lake house with a cupola. Finished in 2016, the house has plenty of room for granddogs and grandchildren who will be forever anchored to Lake Minnetonka.

Of all the department stores in the Twin Cities, Dayton's was beyond compare. For nearly a century, Dayton's legendary hospitality extended well beyond the flagship store on Nicollet Mall in downtown Minneapolis. For many summers, a boat named Daytona, captained by a man in a suit, tie, and hat, would ferry packages across Lake Minnetonka to residents and guests at the resorts. All year long, guests at Dayton's Tea Room enjoyed rich, fresh Guernsey milk, "less than 24 hours from pail to table," from Boulder Bridge Farm on Lake Minnetonka.

The 90-acre farm on Smithtown Bay was owned by Nelson Dayton, son of Dayton's founder George Draper Dayton. Nelson and his wife, Grace, bought Rose Farm in 1926 from Edmund and Nevada Longyear after seeing an ad for the property in Country Life magazine. One of several gentlemen farmers around Lake Minnetonka, Longyear was a real estate investor, mining entrepreneur, and the first prospector to bring diamond drill technology to the Mesabi Range.

The farm, which Nelson and Grace renamed Boulder Bridge Farm after the stone bridge that still stands over the lagoon, included a Dutch Colonial house and a stone boathouse designed by Jackson M. Stone of J.M. Lyton Architects of Minneapolis, as well as several barns and a small herd of Guernsey cows, draft horses, and other animals.

After Nelson died in 1950, Grace and her five sons sold Boulder Bridge Farm. Grace passed away in 1966, but her beloved wild flowers still bloom in the gardens that now belong to Kristie and Bill Lester.

Kristie's parents, Duane and Marian Little, bought one and a half acres of Boulder Bridge Farm in 1975, a year before the rest of the land became the Boulder Bridge Farm community. The property included a mid-century ranch house with stunning views of Smithtown Bay, Grace's gardens, the pump house, and access to the stone boathouse, which the Littles eventually acquired.

The stone boathouse, with the lift door drawn several feet above the water, is one of the few remaining wet-slip style boathouses on the lake.

To continue reading about different styles of boathouses and more great content in Lake Time Magazine, you can find it online HERE or consider supporting this independent publication by becoming a member and receive the latest issues PLUS great Lake + Co. Shop perks! https://www.thelakeandcoshop.com/collections/lake-time-magazine