Rise of The Rural Open-Collar Worker 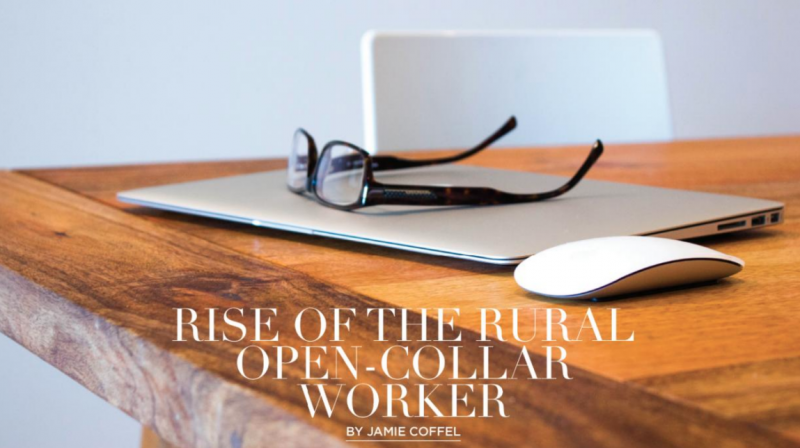 The concept of telework or telecommuting has been in existence for several decades, but until recently has largely been a more metropolitan phenomenon due to the economics driving infrastructure development. In basic terms, internet access became available in areas where providers could recoup their investment in more densely populated areas. More customers per mile means more revenue per dollar spent laying the groundwork.

Yahoo's 2013 decision to terminate the telecommuting option for its employees made big news, but statistics have still shown dramatic year-over-year increases in workers operating from remote locations either full-time or at least several days per week. While Yahoo may be bucking the trend, there is a growing momentum for what has been termed the "open-collar workforce".

Fueling this growth are advances in business collaboration tools from the enterprise platform providers such as Microsoft's SharePoint and disruptive technologies from social network-esque upstarts like Slack (and others) who are helping create work environments where telecommuting doesn't necessarily translate to an out-of-the-loop resource. The hallway chatter once vital to mission clarity is rapidly being supplanted by instant messaging and telepresence technologies.

More limited availability to broadband access in rural areas has not only stifled job growth for the growing remote worker segment, but in extremely rural areas, it's been a major roadblock to economic development where the basic technical requirements of modern business simply cannot be met. Satellite technology is available in most cases, but lacks the amount of upstream capacity needed for some of today's more bandwidth intensive applications. Meanwhile, higher paying jobs and the resulting disposable incomes that could be boosting local economies are flowing to more connected areas. For the well paid telecommuter, broadband access is gaining ground on sandy shoreline as selling points when considering a home purchase.

Under served rural areas also fall victim to a vicious circle of "proficiency lag" where a lack of internet access fosters a lack of technical understanding of web technologies which, to add salt to the wound, slows adoption of the technology.

In order to level the playing field (and just as the Rural Electrification Act of 1936 drove rural development), attention at the federal level is being generated by locally elected officials and rural-focused community advocates at the state and federal levels. Their voices are being heard. Both public and private initiatives are underway to help close the digital divide with billions of dollars being directed to help subsidize the buildout. In August, the FCC announced 9 billion dollars in funding over six years to help narrow this gap by helping private companies extend services to less served areas. In November, Minnesota's Department of Employment and Economic Development awarded 11 million dollars to 15 rural communities for related projects.

Similarly, in 2014 the White House earmarked 2 billion dollars in Universal Service Fund dollars over two years to help bring schools up to broadband standards to combat proficiency lag for all economic stratifications.

While there's no quick fix that will transform remote areas to web havens, many forces are convening to make the rural web a reality. Although more work remains, the opportunity that comes with connectivity has the potential to construct a new rural economy.